When I realised I had finally retired I took up painting in watercolour. Over the years I’d done a lot of watercolour work – background art, posters, press ads, and even some book illustration. I joined a local Art Club in Pinner and discovered two things. The first was how talented some amateur artists are, and the second was that I was at a bit of a loss when left to my own devices with regards to subject matter and even style. Without a commission I foundered. My efforts were somewhat sporadic as a result.

I did some drawings to be auctioned in support of the W. Heath Robinson Museum in Pinner, and then we moved to the ‘country’ to be nearer my daughter and my grandson. I was asked to design the logo for the Little Chalfont Nature Park, did a bit more painting, and my daughter gave birth to HER daughter – my second grandchild.

Then I was told I had Cancer. A bit of a shock, as my only symptoms had been random but embarrassing ‘hiccup’ attacks and I otherwise felt fine. It was in fact Cancer of the Oesophagus. At first it was thought to be operable, but was then found to have spread to the Peritoneum which meant it was not only inoperable but terminal. I had ‘months not years’ to live. I could only be offered palliative care, and if the chemotherapy was successful I might perhaps live 12 months. After paying tax and National Insurance for 50 years the Government would get away with giving me a Pension for just a few months!

Anyone facing imminent death will behave in their own way. I didn’t do the things that people do in fiction and drama – I didn’t liquidate all my assets and blow all my money on women and song. I didn’t start checking off a bucket list, and I didn’t turn to religion. I didn’t turn to holistic medicine, special wonder foods, or faith healers. We all live  in the knowledge of our eventual death, but that is not the same as realising you have seen your last Summer, that you may be living through your last Autumn, you may experience your last Winter and last Christmas  but possibly not because you have probably already experienced your last. I read books about physics, and took comfort from the strangeness of reality and the curious nature of  perception. I told myself, like Peter Pan, that Death might be a wonderful adventure. I reviewed my life and realised how lucky I had always been, how fortunate in my relationships, and how pleasant my working life –  I had a great deal to be grateful for. I was not suffering as much from chemotherapy as other patients I met at the clinic – and their courage and stoicism fortified me. Self-pity became impossible when faced with the youth and circumstances of other sufferers. Unlike others, my illness caused me no financial problems, I had lived to see my child grown and a parent herself, I had grandchildren I doted and dote on, and my wife was wonderful throughout, brave and supportive, and I was buoyed up by her fondness. I was blessed in my life, and grateful for it. My greatest concern was to try and minimise the inconvenience and distress I was causing. At times it was difficult not to whine about the side effects of chemotherapy and to try and maintain as normal a life as possible. The situation was far easier on me than on those closest to me, and their stress and anxiety was terribly distressing to me. I could see a strange kind of mourning in them, even as I lingered on.

The first round of chemotherapy failed, but it was thought I might benefit from a  targeted therapy. Herceptin is primarily used to extend the lives of women suffering from breast cancer, and it seemed it might do the same for people suffering with my type of cancer.  Only one in five people can benefit from the treatment, and luckily, I was apparently one of that twenty percent. This treatment proved to be much kinder than the previous chemotherapy and from my point of view had comparatively no side effects. My immune system was no longer suppressed. I could socialise, fly,  and take holidays abroad. Most wonderfully, my prognosis dramatically improved.  There were people with my type of cancer who had lived for over eighteen months – it was as if I had been promised an eternity. Every three weeks I went for my infusion to the palliative care clinic staffed by the most wonderful nurses (a platitude but true) where for a few hours I spent time with my fellow sufferers in something resembling a supportive and caring club of good friends. Every three months I was scanned to check the progress of the cancer, and the cancer didn’t progress. I needed something else (other than holidays, grandchildren, trying to have a nice time) to keep away from spending time with thoughts of how limited my future might be. 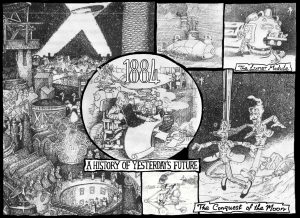 My brother Tim has had a long career working in optical and special effects, but has also pursued for many years a project ‘1884. YESTERDAY’S FUTURE. WHAT MIGHT HAVE BEEN BUT NEVER WAS>’ This is a piece of Victorian Futurism, as if made by the Victorians themselves – a kind of extraordinarily complicated puppet film shown by a Steam Projector! With the support of Terry Gilliam (Tim worked on most of his films) and producer John Needham Tim has laboured long to bring this project to fruition – it was conceived years before the current interest in Steampunk and other similar ideas. I have no grasp of the techniques he uses, but he wanted me to model some character heads, so I did. I hadn’t modelled anything for a long time, so after the heads I made a few little statuettes, including one to use on my Xmas card, and suppressed all thoughts of cancer.

After eighteen months I was still alive, feeling well, and a lot older than I’d expected to be! I was also a lot fatter. Because I lost a lot of weight during the initial chemotherapy, my dietician had told me to eat as much fattening food as I liked: fry-ups, roasts, pies, snacks, beer. I complied with enthusiasm and the weight piled on. So I asked if I could diet and my Oncologist agreed, but because it’s unusual for someone with stage 4 cancer of the oesophagus to join Weight Watchers she also referred me for tests to re-stage my cancer. I was PET scanned, X-rayed, CT scanned, given a Gastroscopy and  biopsies and there was no sign of Cancer. I can’t explain how I felt. It was too amazing, too incredible, too unexpected. No one had ever suggested that I would become cancer free or that palliative care could reach such a conclusion. My Oncologist was  nonplussed but delighted for me. Treatment was ended, except for the three-monthly scans, which in fact also ended as time progressed, and I couldn’t grasp the sudden lurch of direction my life had taken. I had grown used to thinking that I would be dead before everyone I knew, that my wife would soon be a widow, my mother would out live me, that I would never see my daughter grow significantly older, or my grandchildren bloom through their childhood. Now none of that was necessarily true, and in the world of Fiction I should have been overwhelmed with joy and relief and the splendour of life….rushing into the world with renewed optimism and vigour. Every second I would be happy and grateful, and beyond all petty emotions. Well, to a degree….yes.  But without the regular infusions of Herceptin and the support from the nurses and other patients at the clinic I irrationally felt unprotected and anxious. I also felt guilt, because having received the wonderful gift of this extended life, I didn’t know what to do with it – that I owe a debt I am not repaying. My gratitude is enormous, however, as more gifts are added to my life. My daughter gave birth to a second daughter, so I entered my seventies with three grandchildren. I am careful not to harbour too much hope for a very extended future – to see my youngest granddaughter  and her brother and sister grow into early adulthood for instance – as it would make it harder for me to cope if the cancer returns with a bad prognosis. Apart from any other consideration, I know only too well how my illness would affect others. Medically, I am in Extended Remission. My response to the treatment I received was unexpected and highly unusual at the least, but probably not unique. How terrifying would such uniqueness be?

For more information on my professional career