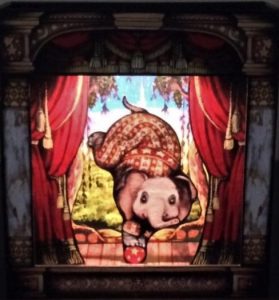 In these strange times I have now begun to make these toy theatre night lights. They have similarities with the paper toy theatres that were apparently popular with the Victorians. As a child I spent hours drawing figures and scenery for an illuminated toy theatre my Dad made for me. I think it was this that set me on a path towards Animation, and I’ve now returned to it in my dotage, having acquired a very nifty cutting machine! However these theatres aren’t really designed for performing little plays – they are decorative lights or night lights. The performers are easily replaced and repositioned, and the backdrops are equally easily changed, and this gives a great variety of ‘performance’ so that there can be a new ‘show’ whenever the theatre is used, so there is a play element to them. Of course, performers and backdrops can be made by the theatre’s owner as well!

THE TOY THEATRE ITSELF

The basic theatre is made from a sturdy 2mm cardstock. It is 6 inches (150mm) wide, 6.5 inches (165mm) high, and 2 inches (55mm) deep. It has fixed curtains, and a back panel with a back drop design. This panel slides upwards to give access to a sliding battery cover, which in turn gives access to the battery holder. The ‘lights’ are 3 volt Light Emitting Diodes (LEDs) which emit no heat. Two AAA batteries power them. There is no risk of either fire or electrocution! A slot between the back panel and the theatre body allows alternative backdrops to be simply slid  in and out of place.

The figures are cut from heavy cardstock, range from 2 to 4 inches (50mm to 100mm) high, and are held upright and in place on the magnet receptive stage by small magnets. The stage itself is not magnetic. The magnets are strongly glued to the figures and given a protective coating. They are not easily separated from the figures, but it wouldn’t be advisable for someone to suck or chew them, so these theatres are not suitable for the very young!

I’ve made four sets of performers and characters. The first is a set of seven performers and three backdrops to make it possible to countdown seven nights until a significant day – perhaps a birthday, or the start of a holiday, or some anticipated party or festivity. All sets are stored in a box with two magnet receptive sides to help keep the figures separate and safe from each other, and a protective sheet of foam board. The colour of the foam board may vary. If the figures have managed to attach themselves to each other, they should be eased apart quite carefully so as not to twist or bend the figures.

The second is a set of eight performers (including a dancing Dodo and a Squirrel on stilts!)and three more backdrops. Single figures can perform in front of any backdrop (including the one on the back plate) or they may form a double act, or even a trio!  The figures in this set can be used to ‘perform’ in front of the backdrop supplied in the Christmas set throughout the festive period. They can be combined with the figures in the Countdown set. There are a large number of possible variants, giving a different show every night!

The third set is (inevitably!) a set of seven festive figures and a festive backdrop to count down seven sleeps until the great event! The figures from the Performers set can be used in conjunction with the festive back drop throughout the festive season.

This set , again, has seven performers and three Backdrops, and might be considered a little ‘older’ than the other three!

I have made these theatres and figure sets available on Etsy for anyone wishing to purchase.

The link to the shop is:

As the social limitations imposed by the virus progress into the chill dark days of Autumn and Winter I will hopefully entertain myself  by making more performers and more back drops, and perhaps even a variant or two on the design of the basic theatre itself. It’s quite a pleasant pastime,  drawing and then printing, cutting multiple shapes, then gluing and assembling all the bits. In some ways it’s as complicated as hand drawing animation!

For more information on my professional career: